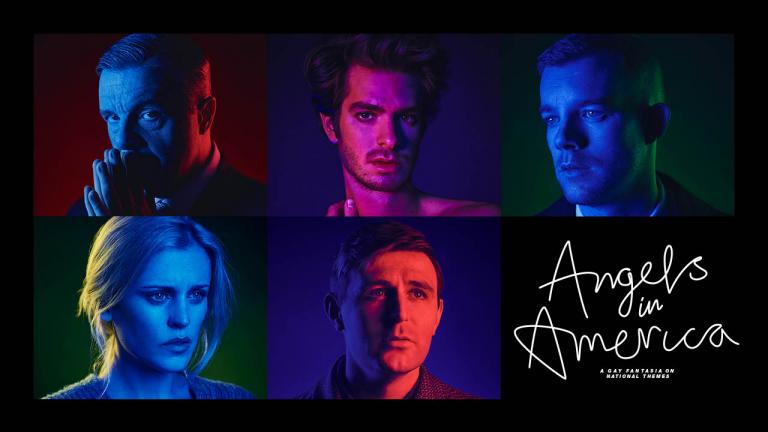 Angels in America has the reputation of being one of the major gay plays of the late 80’s/early 90’s – featuring the effects of HIV/AIDS and closeted politicians, and a coming out story as well, it features many of the topics popular with gay playwrights of the era. Tony Kushner takes all of this and blends it with a fantastical edge, creating a fascinating state of the nation play.

The first part, Millennium Approaches must have been slightly bizarre when it premiered in 1991 – it has many storylines that are left suspended at the end of the play, and it ends on a major cliffhanger, which would not have been resolved for over a year in Perestroika. This really is a show where both parts are necessary to understand the plot as a whole and appreciate it fully. The plot and pacing of this revival are good – though it is over 7 hours and has 4 intervals, it rarely drags which is an amazing feat. There is very little that it superfluous and only a few sections that could possibly benefit from trimming. The play is given an epic scale by its sprawling nature, with only the second part possibly being the less focussed of the two.

The set is also inherently theatrical – it is not a naturalistic set (as per the script) and this is a strength. Both parts have very different feels – the first part uses a rotating set that is cleverly utilised to give the impression of location – these then get removed about 30 minutes before the end of Millennium Approaches, and are replaced by much more free form sets as the play dictates. This is effective because of the larger set pieces that occur in the latter play (such as the Angel) and also represents the restructuring that the term ‘perestroika’ entails.

A mention must also go the effects and “theatrical magic” that the show utilises. The most iconic moment of the first show, with Prior Walter and the Angel crashing into his bedroom with the other Priors is wonderful and inherently theatrical (in the TV adaptation this is achieved using CGI). The end is truly magical and makes the audience eager for more, which is built upon in the second part.

The cast of this revival is also particularly noteworthy – the National has managed to collect the best stage, TV and film actors to appear in this production. Top US actors such as Nathan Lane put in a delightful turn as Roy Cohn – he is a true scene stealer, especially in the early parts of the play where he is firing on all cylinders. Former Spiderman Andrew Garfield is able to be good depth to the role of Prior Walter, a role that on a shallow reading is just selfish and conceited. Russell Tovey portrays Joe Pitt well, charting the character’s conflicting emotions and conflict between his faith with skill, with his wife Harper played spectacularly well by Denise Gough. Gough does exceptionally well balancing the fantasy and reality the role demands. They are supported by the rest of a stellar ensemble, without a weak link in the cast.

Summary: One of the must-have tickets this summer, with an incredible ensemble cast. Highly recommended *****

London based Theatre lover who has decided to start this review blog to chart some of the shows that he sees - expect a wide range of shows in all genres! View all posts by alltheatrereviews